Graduation is scary. You not only feel vulnerable and lost, but you’re full of uncertainties with a lot of pressure to succeed in the world. From living up to your parents’ expectations to figuring out your own path and dreams amidst all the chaos, graduates always feel unprepared and overwhelmed.

And that’s where these successful minds come in. They have it all and over the years have made some compelling speeches to inspire us all. How about a quick pep talk, eh? The founder of Amazon Jeff Bezos, in his address to the Princeton class of 2012 drew out the difference between gifts and choices. He said, “Cleverness is a gift; kindness is a choice. Gifts are easy – they’re given after all. Choices can be hard.” 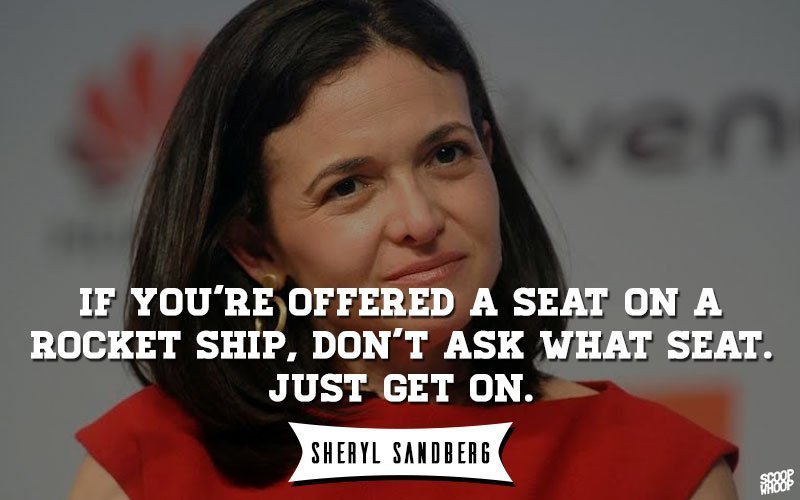 Facebook COO Sheryl Sandberg spoke from personal experience in her address to the Harvard Business School class of 2012. When companies are growing quickly and they are having a lot of impact, careers take care of themselves. And when companies aren’t growing quickly or their missions don’t matter as much, that’s when stagnation and politics come in.” Another sound advice on growing up, Ellen DeGeneres told the grads of 2009 at Tulane that, “When I was younger, I thought success was something different. I thought, when I grow up, I want to be famous. I want to be a star. I want to be in movies. When I grow up I want to see the world, drive nice cars, I want to have groupies. My idea of success is different today.” She also added, “Never follow anyone else’s path unless you’re in the woods and you’re lost and you see a path — by all means you should follow that.” Acclaimed British author and artist Neil Gaiman in his speech to the 2012 graduates of the University of the Arts spoke on the perks of being yourself to find success. He said, “The moment you feel that, just possibly, you’re walking down the street naked, exposing too much of your heart and your mind and what exists on the inside, showing too much of yourself, that’s the moment you may be starting to get it right.” An important lesson on listening to our inner voice, our gut, Oprah Winfrey gave the finest advice to Stanford’s class of 2008. “When you’re doing the work you’re meant to do, it feels right and every day is a bonus, regardless of what you’re getting paid. How do you know that? It feels so. The trick is to learn to check your ego at the door and start checking your gut instead.” Overcoming failure isn’t everybody’s cup of tea. But probably that’s the reason why J.K. Rowling stressed on not avoiding failure. Rowling explained, “It is impossible to live without failing at something, unless you live so cautiously that you might as well not have lived at all — in which case, you fail by default.” David Foster Wallace in his 2005 Kenyon College address made a compelling speech which today has been put into a short film. On our life choices and learning, he says, “Learning how to think really means learning how to exercise some control over how and what you think. It means being conscious and aware enough to choose what you pay attention to and to choose how you construct meaning from experience. If you cannot exercise this kind of choice in adult life, you will be totally hosed.” Self-doubt is the worst of all evils and Frozen director Jennifer Lee reiterated the same in her piece to the University of New Hampshire class of 2014. She further explained, “People talk about the dangers of rose-colored glasses, but let me tell you, the lenses of self-doubt are far worse. It makes you defensive instead of open, reactive instead of active. Self-doubt is consuming and cruel. And my hope today is that we can all collectively agree to ban it.” Michael Lewis stood before Princeton’s 2012 graduates and advised all to acknowledge the role of luck in their lives. He said, “People really don’t like to hear success explained away as luck — especially successful people. As they age, and succeed, people feel their success was somehow inevitable. They don’t want to acknowledge the role played by accident in their lives.” Standing in front of Harvard’s 2000 batch, comedian and alum Conan O’Brien gave a brilliant explanation for the above quote. He mused, “You feel terrific when you get it (white tux), but then you’re desperately afraid of getting it dirty, of spoiling it.” Guess what his solution is? “Fall down. Make a mess. Break something occasionally. Know that your mistakes are your own unique way of getting to where you need to be.” Robert Krulwich addressed a bunch of journalism grads at University of California, Berkeley’s in 2011 and taught the bunch to value action. He urged, “Think about NOT waiting for a company to call you up. Think about not giving your heart to a bunch of adults you don’t know. Think about horizontal loyalty. Think about turning to people you already know, who are your friends, or friends of their friends and making something that makes sense to you together, that is as beautiful or as true as you can make it.” Salman Khan, the founder of Khan Academy, urged MIT grads of 2012 to not lose sight of what really matters and take on life as if it were a do-over. He says, “You really do have the chance to do it all over again. You can be the source of positivity that you wished you had been the first time around.” All of us want to change the world but are afraid to try. Singer Bono, in his speech to the University of Pennsylvania class of 2004, reassured us that it’s possible. “And it’s waiting for you to hammer it into shape. Now if I were a folksinger I’d immediately launch into ‘If I Had a Hammer’ right now get you all singing and swaying. But as I say, I come from punk rock, so I’d rather have the bloody hammer right here in my fist.” In the simplest of terms, Stephen Colbert advised the 2006 class of Knox College to sport a ‘yes’ whenever required and leave the rest to fate. He explained, “You are about to start the greatest improvisation of all with no script. No idea what’s going to happen, often with people and places you have never seen before. And you are not in control. So say ‘yes.’ And if you’re lucky, you’ll find people who will say ‘yes’ back.” Renowned writer Barbara Kingslover made the commencement speech at Duke in 2008. She highlighted the importance of community and said, “Growing up means leaving the herd, starting up the long escalator to isolation.” She later explained how “community is our native state”, and needs to broken free from. Pulitzer Prize-winning writer and humorist Russell Baker offered a rather peculiar view in 1985 to the grads of Connecticut College. A life guide comprising of these 10 things: A little difficult to understand, philosopher Cornel West, in his 1993 speech at Wesleyan University, placed the accent on his version of positivism or ‘audacious hope’ (different from optimism) and its utmost need. He told the grads, “Optimism is a notion that there’s sufficient evidence that would allow us to infer that if we keep doing what we’re doing, things will get better. I don’t believe that. I’m a prisoner of hope, that’s something else. Cutting against the grain, against the evidence.” Life moves on and so should we and so actor Bradley Whitford, in his 2004 commencement speech at the University of Wisconsin (Madison), asked the grads to do the same but not without action. He said, “Every story you’ve ever connected with, every leader you’ve ever admired, every puny little thing that you’ve ever accomplished is the result of taking action. You have a choice. You can either be a passive victim of circumstance or you can be the active hero of your own life. Action is the antidote to apathy and cynicism and despair.” Author Ann Patchett put forth her case at the Sarah Lawrence class of 2006 with engaging ideas on going back to our alma-mater, not for nostalgia but for self-reflection. Because “when you look ahead there isn’t a bread crumb in sight — there are just a few shrubs, a bunch of trees, a handful of skittish woodland creatures.” She further adds, “Sometimes not having any idea where we’re going works out better than we could possibly have imagined.” Winston Churchill, amidst the chaos of World War II, made a wonderful speech in 1941 to the Harrow School graduates on finding courage against fear. “You cannot tell from appearances how things will go,” he pointed out. “Sometimes imagination makes things out far worse than they are; yet without imagination not much can be done. Those people who are imaginative see many more dangers than perhaps exist; certainly many more than will happen; but then they must also pray to be given that extra courage to carry this far-reaching imagination.” Henry Kravis, founder of the private equity firm KKR, in his 2011 speech at Columbia Business School spoke about the lure of relativism. Didn’t get it? Well what he means is you cannot relatively judge yourself or the company you work for. Because self integrity, honesty and loyalty matters. “These are absolutes. Trust me, they will make your lives simpler — and they carry their own rewards.” James Beard Award-winning chef José Andrés, gave a refined recipe for success in his 2014 commencement speech at George Washington University. To make the outcome even better, he adds, “Serve it straight-up, but let me give you a secret ingredient: add a dash of criticism on top because those naysayers play an important role, too. They motivate you to rise above, to challenge yourself, to prove them wrong.” Jon Stewart, speaking at the College of William and Mary to class of 2004, asked the grads to welcome uncertainty. “The unfortunate, yet truly exciting thing about your life, is that there is no core curriculum,” he said. “The entire place is an elective. The paths are infinite and the results uncertain. And it can be maddening to those that go here, especially here, because your strength has always been achievement. So if there’s any real advice I can give you it’s this: College is something you complete; life is something you experience.” 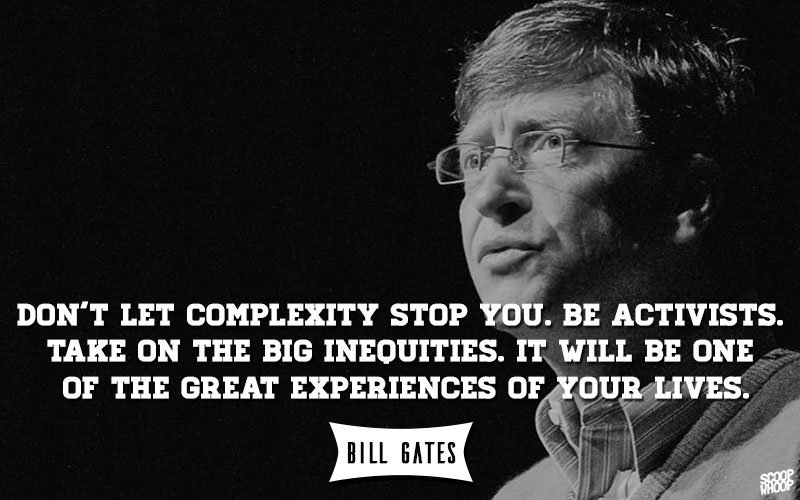 Bill Gates in his speech to the Harvard University graduates of 2007 spoke of knowledge, perseverance and the importance of surpassing complications. He explains, “You have more than we had(better tech and info) ; you must start sooner, and carry on longer.” We indeed are a smarter lot with much better access to information and knowledge. Let’s listen to the man now! Probably the most famous commencement speech in recent history, Steve Jobs, the Apple founder, reminded the Stanford class of 2005 that our lives will always fall into place as long as we trust in something.  In the meantime, we must chase what we love. We have to “stay hungry, stay foolish.”