A police officer in Fredericksburg, Virginia, used a Taser and pepper spray May 4 on a man believed to have earlier suffered a stroke.

A Hyundai drove over a median, hit a sign, then hit a Jeep that day, police there told WTVR. The Hyundai was followed by the Jeep to an intersection where police showed up, authorities said.

Jurgens resigned from his post May 14, according to reports. 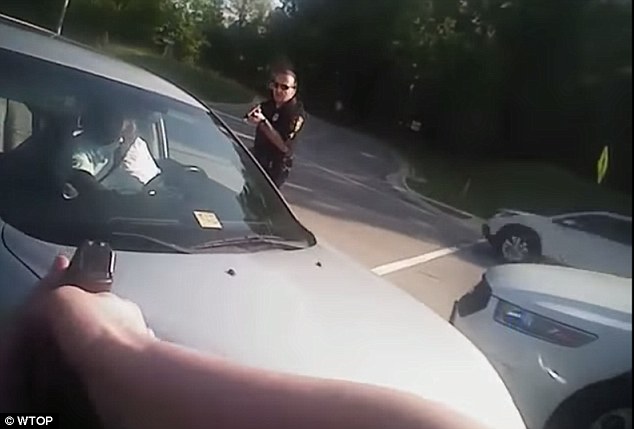 Officers: Footage from Sgt. Crystal Hill’s body camera shows her and Cpl. Matt Deschenes pointing at David Washington while he is in the Hyundai

Capt. Rick Pennock said in a statement ‘The use of force demonstrated in the incident involving Mr. Washington was not in compliance with department policy or training.

‘We take matters such as these very seriously and require that officers at all times exercise appropriate restraint and good judgment in their dealings with citizens.’

The footage shows Hill and Deschenes are the first to arrive.

They point their guns at Washington and yell at him to get out of the car. Washington fails to do so.

Video shows Jurgens arrives with his gun out and aimed at Washington. He later takes out his Taser, and uses it on Washington.

An officer is heard saying he doesn’t believe the Taser made the connection with the driver. Jurgens then pepper sprays Washington in the face.

Washington is dragged out of the car, and officers soon handcuff him.

‘I can’t breathe,’ Washington says in the footage.