A PENNILESS teacher has spent four months living in her sports car in a car park because she will not give up her beloved dogs. 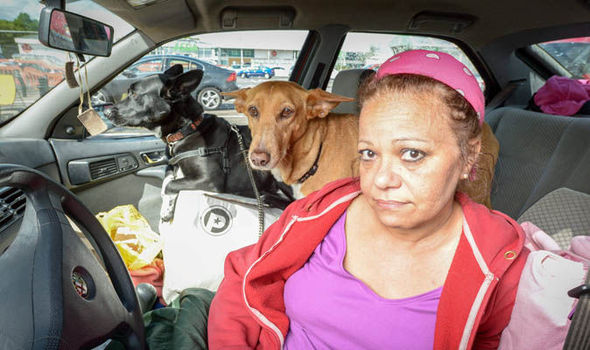 Hillary Barrows, 57, returned to Britain  in January after eight years teaching in Europe.She rented a home but failed to find a job and was broke after three weeks.

The council offered her emergency accommodation – on condition she gave up her dogs Robbie and Cleo.

Hillary refused to abandon the pets she rescued in Spain so she moved into her red 20-year-old Alfa Romeo 146 hatchback.

Hillary now lives in the Asda car park in Canterbury, Kent, with her two pets.

Divorcee Hillary said she had no family in England.

Her 89-year-old mother Becky moved to Vancouver, Canada, and the rest of her family has emigrated to New Zealand.

She said: “I drove to Canterbury because the Salvation Army helped me and fed the dogs and there is a public toilet and a shower room I use once a week.”

She said Asda staff took pity on  her, giving her breakfast items and hot water for soup.