Rescuers have pulled a 15-year-old boy alive from the rubble of Nepal’s massive earthquake, five days after the disaster.

The teenager’s rescue from the ruins of the collapsed Hilton Hotel in Kathmandu provided a rare moment of joy as relief coordinators warned it could take five days to reach some of the worst hit areas, accessible only by foot.

“A 15-year-old boy has been rescued from the rubble of a lodge called Hilton Guesthouse,” police spokesman Kamal Singh Bam said.

“We are awaiting more detail,” he added, identifying the boy as Pemba Lama.

Grainy broadcast footage showed a crowd of rescuers trying to bring Pemba out of the rubble of the collapsed Hilton Guesthouse.

The mud-caked teenager was fitted with a neck brace and hooked up to an intravenous drip at the scene before being lifted on a stretcher into an ambulance that then raced to hospital.

The boy was conscious, held the hand of one of his rescuers and looked towards a large group of photographers and television news crews as he was brought to safety, people on the scene said.

Photo: Earthquake survivor Pemba Lama, 15, is rescued by the Armed Police Force from the collapsed Hilton Hotel after the earthquake in Kathmandu. (Reuters: Adnan Abidi) 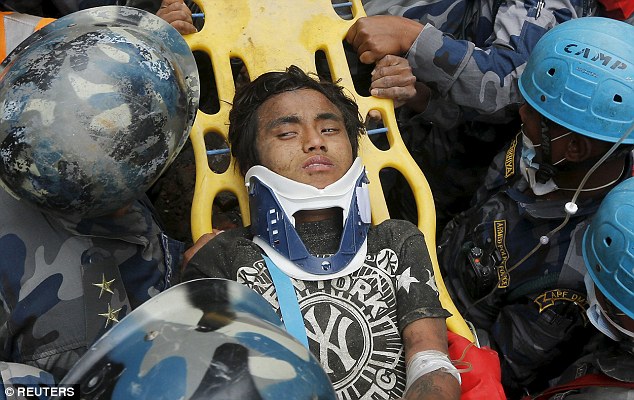 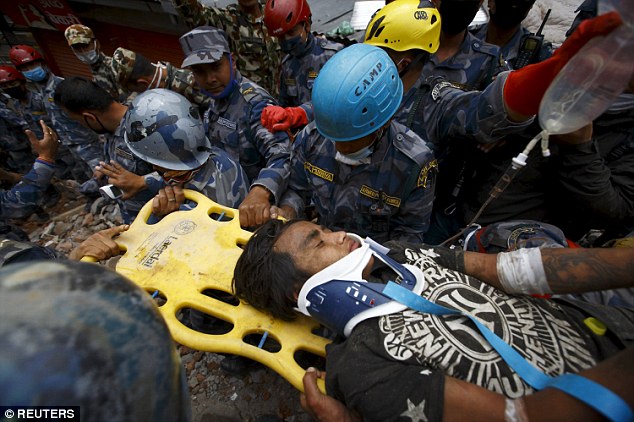 Emergency medical attention: The boy was carried out in a stretcher. His face was covered in dust and medics had put an IV drop into his arm and a brace around his neck 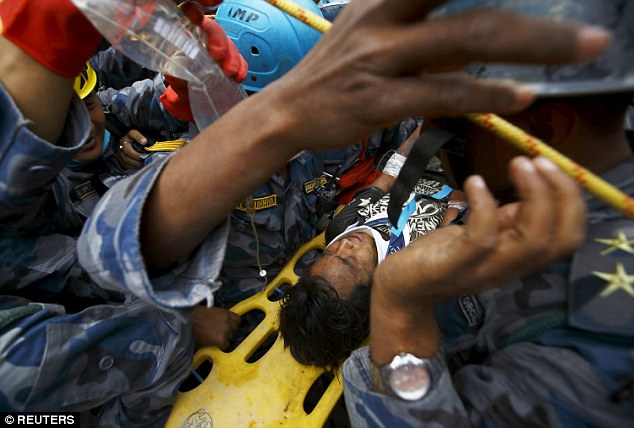 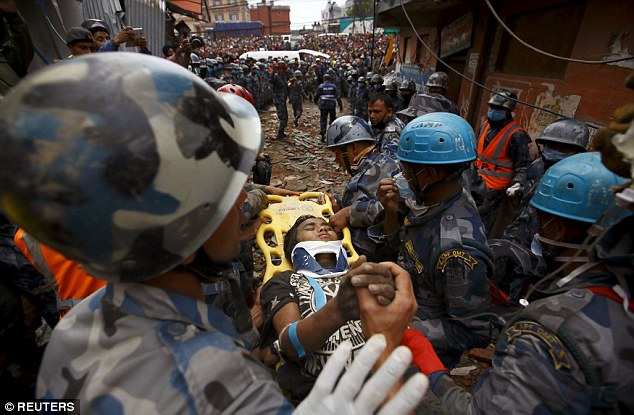 A large crowd had gathered and cheered when the teenager was brought out.

Members of the security forces hoisted the rescuer onto their shoulders to more cheers.

The news is likely to reinvigorate the efforts of rescuers who have had to contend with regular shocks and rain, which makes it harder for sniffer dogs to work out if anyone is alive below the mountains of concrete.

The mood in Kathmandu has become increasingly grim since Saturday’s magnitude-7.8 quake, the deadliest in Nepal for more than 80 years.

Photo: Members of the Nepalese Armed Police Force work at the ruins of the Hilton Hotel. (Reuters: Navesh Chitrakar)

After desperate Nepalis clashed with riot police and seized supplies of bottled water on Wednesday, the government acknowledged that it had been overwhelmed by the scale of the crisis.

Images emerged after local media reported a four-month-old baby rescued alive after being buried under a collapsed building for 22 hours after the quake struck.

However, these stories are only far and few as many of the communities worst affected by Saturday’s quake are in remote areas of the Himalayas that rescuers have not been able to reach.

In its most recent situation report, the UN said that search and rescue was still limited outside of the Kathmandu Valley.

The latest official toll from Nepal’s National Emergency Operation Centre put the number of dead at 5,489 and more than 10,000 are known to have been injured.