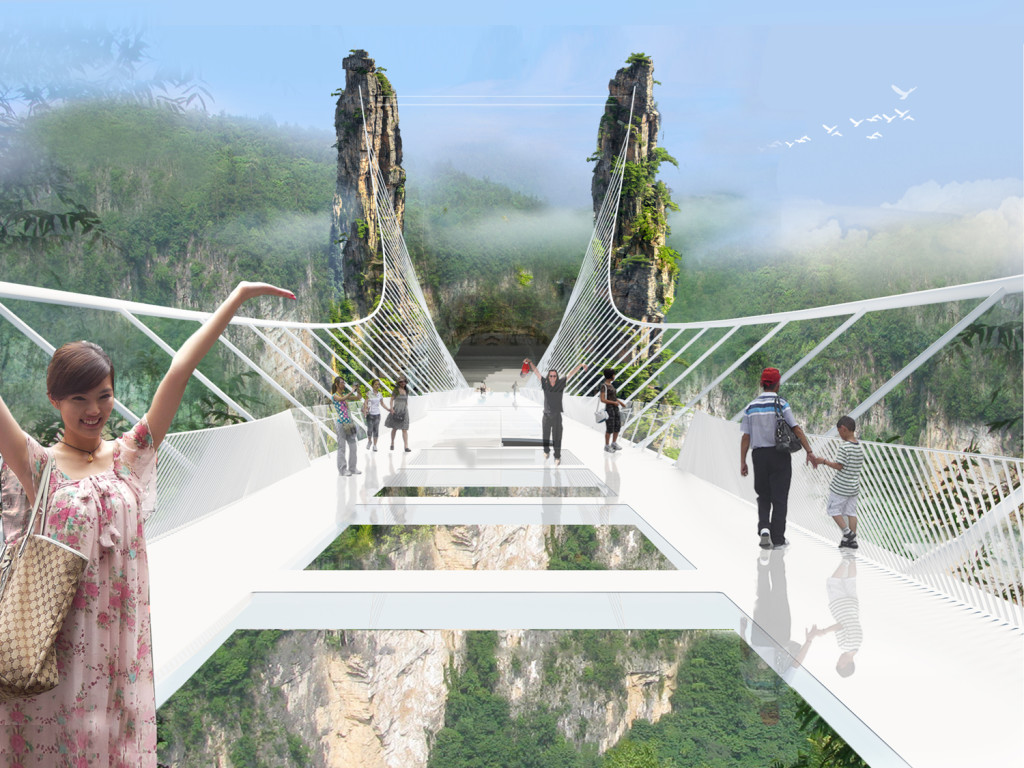 Haim Dotan didn’t want to build a bridge. When two engineers approached the Israeli architect about designing a span across a 1,200-foot canyon in Zhangjiajie National Forest in China, his answer was a quick and resounding no.

The land is known for its dramatic jagged rock formations and rich vegetation. If it looks like a scene out of Avatar, that’s because it is. The area, in the northwest part of Hunan province, was director James Cameron’s inspiration for the movie’s Halleluja Mountain. “[The developer] asked me, ‘What do you think about a bridge from here to there?’ And I said, ‘No,’” Dotan says. “He looked at me and said ‘Why, what are you talking about?’ And I said, ‘Why do you want a bridge? It’s too beautiful.’”

The developer pressed him, and Dotan finally relented. “I told him, ‘We can build a bridge but under one condition: I want the bridge to disappear.’” 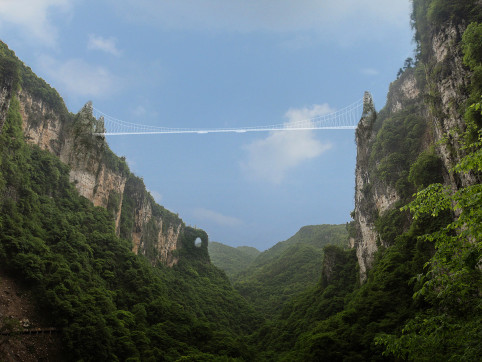 When the Zhangjiajie Grand Canyon Glass Bridge opens in the fall, it will be the longest glass pedestrian bridge in the world. The structure stretches from one rocky summit to the next with little apparent effort. The bridge seems to float 1,300 feet above the ground, almost as though it were part of the clouds.

The engineering plans call for it to be 20 feet wide—large enough to host the fashion shows its developers plan to hold there—with a center platform that provides an unobstructed view and, for the adventurous types, a place for bungee jumping. The white supporting beams beneath the 5-centimeter-thick safety glass were originally 10 feet wide. Dotan wasn’t pleased. “I told them, ‘No, there’s no way,’” he says. “The bridge has to disappear.”

After more than three years of work, the structural engineers got the beams down to not quite 2 feet, thanks to suspension cables that stretch from the cliffs to the center of the span. Although the bridge has an ethereal look, Dotan says it can withstand wind gusts of more than 100 mph.

In recent years, China has shown a particular proclivity for building transparent bridges in epic locations. There’s a diaphanous structure in Hunan Province that sways in the breeze 650 feet off the ground; another see-through walkway that wraps around a cliff.

Dotan’s design is by far the most sophisticated of them. It’s so elegant, in fact, its engineers have adopted a poetic way of thinking about the bridge. “The engineers described it as thin as a wing and as light as a swallow,” Dotan says with a laugh. “My god, can you imagine a structural engineer describing a bridge like this?”

9-Year-Old Girl Builds Shelters For The Homeless And Grows Food For Them, Too
Syrian women tear off black garbs as they flee ISIS territory