This Is the Food You’ll Eat on Mars

This Is the Food You’ll Eat on Mars
DailyCrawler

Thanks to these two chefs, interplanetary explorers are going to eat surprisingly well 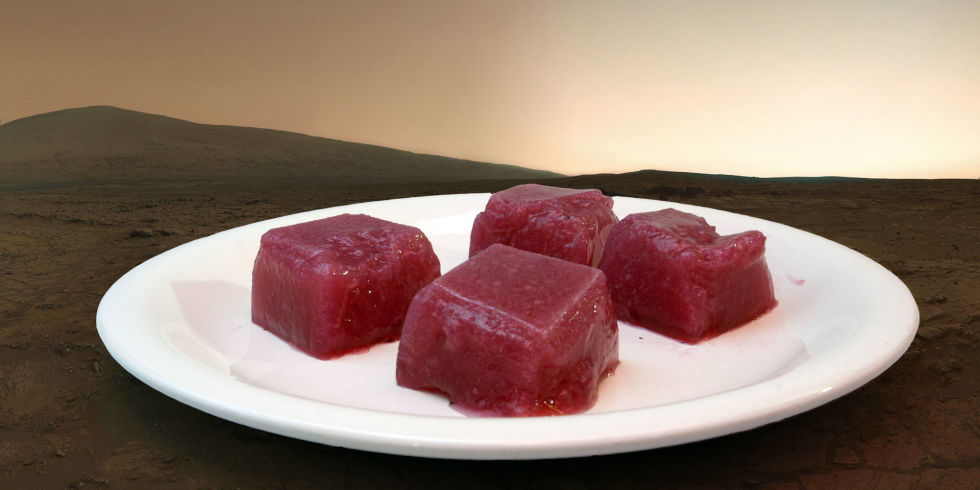 There are plenty of ways Mars wants to kill you. It has very little atmosphere. It’s cold. There are thick dust storms. The planet doesn’t protect the surface from deadly space radiation the way that Earth does. But the biggest challenge for humans who want to go there might be the most basic one: You gotta eat.

“One of the things that’s extremely clear is that the life on Mars, for the first people that arrive there, is going to be like camping out in the fuselage of an airplane,” Douglas Paulson says. “They’ll never go outside. They really won’t have access to fresh foods.”

Menu for Mars, a project by chefs Heidi Neilson and Paulson, aims to crack this problem. They’re looking for the sorts of foods that you can realistically grow in Martian soil, or store easily on Mars, or, at least, have on Mars without having to waste too much precious cargo room. Their work is currently on display in the exhibit “The Menu for Mars Kitchen” at the Pierogi’s The Boiler Space in Williamsburg, Brooklyn, New York.

So what’s on the menu? Crickets. Algae. Fungus. Plants that grow like weeds (like purslane and dandelions) and require little water—unlike, say, a greenhouse full of tomatoes. Dried or shelf stable foods, like polenta and raisins. Lots of cheese powder for flavoring. Plenty of spice to keep it flavorful and help with what’s become a common problem on the International Space Station: everybody’s noses seem to get plugged, and they need a little spice kick to clear them.

“They’ll never go outside. They really won’t have access to fresh foods.”

Some of the recipes they’ve come up with would befit a frugal chef in a postapacalpytic world. Others come closer to Martian MREs. They’re not quite as basic as Soylent, but the same basic concept of basic nutrition on the go for those with busy lifestyles. You know, like martian explorers surviving on a harsh, cold, desert world constantly bombarded with cosmic radiation.

The pair spoke to astrophysicists, agronomists, and chefs, trying to find a way to make palatable food on limited resources, and work on sustainable agriculture in what might amount to a grow room. It was not just about growing food, but about building compost to ensure nutrient rich soil in a small habitation.

“We’d review the conditions are Mars as compared to the conditions on Earth, and also the requirements for getting food there and preserving them,” Neilson says. “Part of the discussion was examining the menu of the place we were eating, and then thinking about how that might be adapted. Some things on the menu might be adapted for eating on Mars based on thermostabilized foods, powdered dried ingredients, so forth.”

If Neilson and Paulson are right, then future astronauts could be eating well. Imagine living on Mars and cooking up a batch of misir wot, that wonderfully aromatic and spicy Ethiopian lentil dish. Okay, at this point there’s no spongy sourdough injera bread, though the mere mention got Neilson’s mind turning with new ideas for Martian cuisine.

Even if Ethiopian food isn’t for everyone on Earth, on Mars it’ll certainly be better than, say, the TVP-and-peanut-butter disaster the two chefs cooked up during an experiement last summer—Paulson’s attempt at a nutrition shake. He says it was “super bland” and “had the consistency of vomit.”

Menu for Mars isn’t an official experiment funded by scientists and space agencies. On one level it’s just a couple of chefs having fun, with the results potentially guiding the future of interplanetary cuisine. And the pair believes there’s a lot to learn from this kind of culinary research beyond just how to keep astronauts alive on cricket powder. It’s about getting the public thinking about the harshness of life on Mars – and about how agriculture and food might change on Earth if we can’t stop the worst effects of climate change.

“It is a lot about getting people thinking about how weak and difficult the life on Mars will be, but also thinking about what would we do here on Earth in regards to rethinking agriculture and sustainability issues,” Paulson says.

Scientists just made a major breakthrough that’s going to help a lot of individuals with paralysis.
Scientists Find Scores of Species in Philippine Waters